To Stand or Not to Stand for the National Anthem

I am werary of hearing whether you should stand or kneel during the National Anthem. It is all over social media these days. Everyone has an opionion. I am sure you have read all about it too. To stand or not to stand for the National Anthem – that is the question.

So what do you think? Stand or kneel for the National Anthem?

I looked up some history on the National Anthem in the US – The Star Spangeld Banner. The National Anthem was written in 1814 by Francis Scott Key. President Herbert Hoover signed the bill that made the song the national anthem in 1931.

According to Wikipedia the custom for when people sing the National Anthem is: 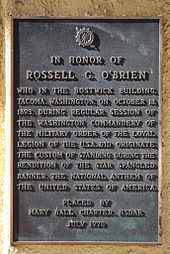 Trending
How to Find Peace

Plaque detailing how the custom of standing during the Anthem came about in Tacoma, Washington, on October 18, 1893, in the Bostwick building

United States Code, 36 U.S.C. § 301, states that during a rendition of the national anthem, when the flag is displayed, all present except those in uniform should stand at attention facing the flag with the right hand over the heart; Members of the Armed Forces and veterans who are present and not in uniform may render the military salute; men not in uniform should remove their headdress with their right hand and hold the headdress at the left shoulder, the hand being over the heart; and individuals in uniform should give the military salute at the first note of the anthem and maintain that position until the last note; and when the flag is not displayed, all present should face toward the music and act in the same manner they would if the flag were displayed. Military law requires all vehicles on the installation to stop when the song is played and all individuals outside to stand at attention and face the direction of the music and either salute, in uniform, or place the right hand over the heart, if out of uniform. A law passed in 2008 allows military veterans to salute out of uniform, as well.  However, this statutory suggestion does not have any penalty associated with violations. 36 U.S.C. § 301

This behavioral requirement for the national anthem is subject to the same First Amendment controversies that surround the Pledge of Allegiance. For example, Jehovah’s Witnesses do not sing the national anthem, though they are taught that standing is an “ethical decision” that individual believers must make based on their “conscience.”

I am in the camp that STANDS when the National Anthem is played. I STAND during the Pledge of Allegiance too. It’s all about honoring our fallen heros for me.  It’s about taking a moment of time and saying thank you. It’s not about wheter things are hunky dorie for everyone everywhere – we know that isn’t true in this world.

The National Anthem is a time for me to honor those who have died for my freedom. There is nothing to protest in my book – they died. It’s about them and their sacrifice, not about me or my thoughts on things. To make it a protest for this or that is plain disrespectful in my book.

Here are the original lyrics:

O say can you see, by the dawn’s early light,
What so proudly we hail’d at the twilight’s last gleaming,
Whose broad stripes and bright stars through the perilous fight
O’er the ramparts we watch’d were so gallantly streaming?
And the rocket’s red glare, the bomb bursting in air,
Gave proof through the night that our flag was still there,
O say does that star-spangled banner yet wave
O’er the land of the free and the home of the brave?

On the shore dimly seen through the mists of the deep
Where the foe’s haughty host in dread silence reposes,
What is that which the breeze, o’er the towering steep,
As it fitfully blows, half conceals, half discloses?
Now it catches the gleam of the morning’s first beam,
In full glory reflected now shines in the stream,
‘Tis the star-spangled banner – O long may it wave
O’er the land of the free and the home of the brave!

And where is that band who so vauntingly swore,
That the havoc of war and the battle’s confusion
A home and a Country should leave us no more?
Their blood has wash’d out their foul footstep’s pollution.
No refuge could save the hireling and slave
From the terror of flight or the gloom of the grave,
And the star-spangled banner in triumph doth wave
O’er the land of the free and the home of the brave.

O thus be it ever when freemen shall stand
Between their lov’d home and the war’s desolation!
Blest with vict’ry and peace may the heav’n rescued land
Praise the power that hath made and preserv’d us a nation!
Then conquer we must, when our cause it is just,
And this be our motto – “In God is our trust,”
And the star-spangled banner in triumph shall wave
O’er the land of the free and the home of the brave.

Here is a great sound byte on the Issue by Michael Morris – definatly worth the listen:

Billionaires and millionaires linking arms and taking knees in unity for what? There are brave men and women in real uniforms but you won’t find them on the football field. You’ll find them in the military and law enforcement. They’re not famous. They’re not rich. But they’re our very best. They put their lives on the line everyday. And they’re being disrespected. – Mark Levin

Diana Rasmussen is a Faith Builder, Worship Leader, Veteran’s wife, and a Certified Peer Specialist. At her blog Prayers and Promises she shares from her heart on how to find hope in this crazy world!

Diana Rasmussen is a Faith Builder, Worship Leader, Veteran's wife, and a Certified Peer Specialist. At her blog Prayers and Promises she shares from her heart on how to find hope in this crazy world!

Your Thoughts Are Treasures Cancel reply

This site uses Akismet to reduce spam. Learn how your comment data is processed.